This project began as a collaboration with USC historian William Deverell, Director of the Huntington-USC Institute on California and the West. Like The Danube Exodus and Cultivating Pasadena, it was to be an archival cultural history built around the holdings of a specific archive (the Huntington Library), combined with home movies and stories collected from ordinary people. Labyrinth’s creative director Rosemary Comella came up with the title Jewish Homegrown History, while I (as writer/ producer) selected the three primary themes—Immigration, Identity and Intermarriage. During our fund-raising phase, many urged us to drop this subtitle (or, at least the word intermarriage) because it is still such a controversial topic, which was why I had chosen it. Our Advisory Board (including distinguished historians Hasia Diner, Frances Dinkelspiel, Barbara Kirshenblatt-Gimblett, Deborah Dash Moore, George Sanchez, Jonathan Sarna and Kevin Starr) fortunately agreed.

We ended up producing a Transmedia Network, consisting of: 1) a large scale, multi-screen installation at the Skirball Cultural Center, which presented 12 stories about Jews in California, based on home movies we collected and re-edited, 2) an on-line multimedia archive where visitors could access historical documents and interviews and upload their own stories and family pictures which became part of the archive, 3) a continuous screening of short documentaries on similar subjects within the exhibition space, and 4) the publication of a special issue of A Cultural History of Jews in California (vol. 7, 2009) on “The Jewish Role in American Life,” which was guest edited by William Deverell and contained my essay, “Jewish Homegrown History: In the Golden State and Beyond.” Before opening at the Skirball, we previewed the installation in October 2011 in USC’s Visions & Voices series, with a panel of historians and filmmakers. During the main run at the Skirball (from March 29 – September 2, 2012), there were other related events—including a Home Movie Collection Day and a special screening of brilliant feature-length documentaries on Jews in America by Alan Berliner, Peter Forgács and Lynn Littman.

Although working with a limited budget, we had to expand our creative team in order to make the 12 orchestrations, which each appeared on three large screens. Rosemary and Scott Mahoy each did two; the rest were done by young media artists we specifically recruited for the project: five were edited by Daniel Bydlowski, a secular Jew from Brazil who was completing his MFA in production; and one each by Victor Bautista and Danny Rabins, both sons of mixed-race marriages between a Mexican Catholic and East European Jew. We also recruited two amazing interns from Singapore: Pearlie Goh, who edited the final orchestration, and Huy Nguyen Truong, a doctoral student in computer science who did the back-end programming for the installation. Like the others, they both became totally immersed in all aspects of the production—collecting the home movies, interviewing the subjects, installing the exhibition, enriching the materials on the website, and creating an introductory film that appeared both in the museum and in the on-line archive. 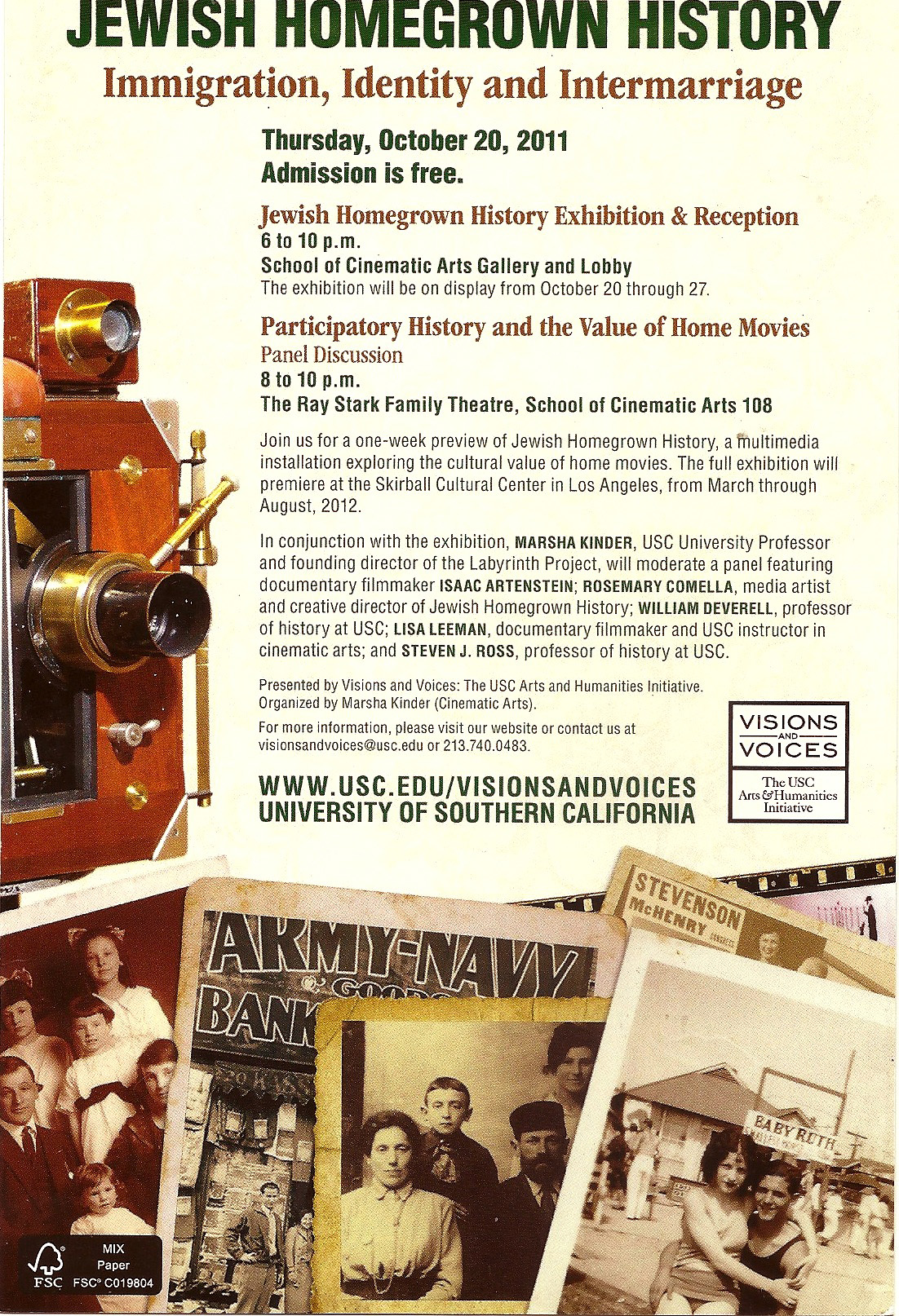