An Evening with Pedro AlmodOvar

An Evening with Pedro Almodóvar , USC, November 11, 2011. Marsha Kinder presented USC’s Eisenstein Award to Almodóvar on behalf of the School of Cinematic Arts. In response to her speech, he said “She knows my films better than I do.” 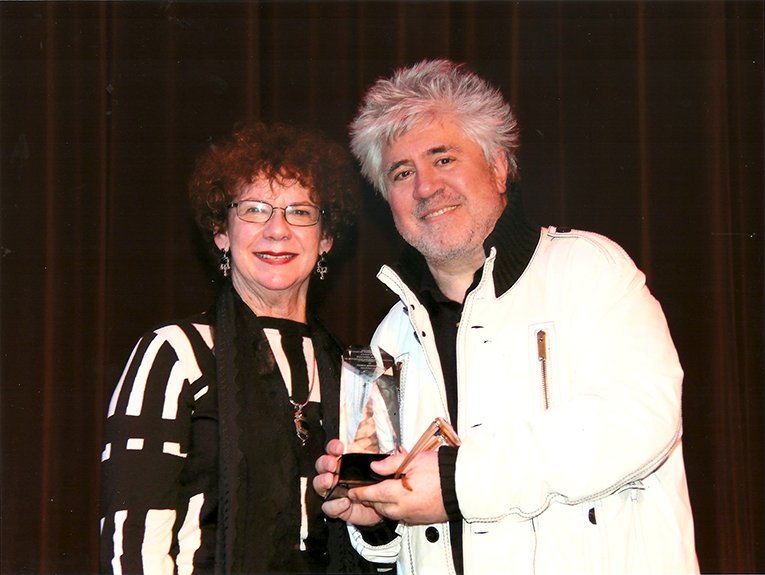 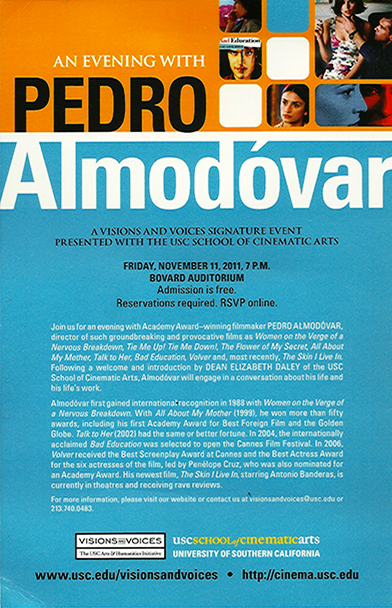 (text of my speech)

In 2003, the USC School of Cinematic Arts inaugurated the “Sergei Eisenstein Award,” a prize for an international filmmaker who has expanded the language and cultural impact of cinema worldwide. We don’t give this award every year--only when we think someone is especially deserving of this recognition. And the Cinema faculty voted unanimously to award this prize to PA for his extraordinary achievements in expanding the emotional and stylistic range of cinema and transforming the way that Spain and its cultural heritage are perceived worldwide.

Over the past 31 years (from 1980 to the present), PA has made 18 innovative feature films that demonstrate his growing mastery over the visual, narrative, and musical language of the medium. Above all, they demonstrate the transformative power of cinema—showing how movies can surprise and change us, how they can destabilize our moral assumptions and generate a new kind of subjectivity.

When I interviewed PA in 1987 (shortly after the release of Law of Desire), he told me, “everybody has heard that now [since the death of Franco] everything is different in Spain...but it is not so easy to find this change in the Spanish cinema. I think in my films they see how Spain has changed, above all, because now it is possible to do this kind of film here...a film like Law of Desire. “

The opening of Law of Desire (one of his most outrageous films and still one of my favorites) dramatizes this transformative power. After watching a pornographic film sequence, a repressed rightwing heterosexual (played by Antonio Banderas) is instantly inflamed with homoerotic desire, and eventually he murders his rival and willingly sacrifices his own life in order to spend one hour with his lover, who is a filmmaker like Pedro. In this intense melodrama, sexual mobility is linked to social change and cinema spectatorship transforms our lives. The film reminds us that every time we see one of Almodovar’s movies, we risk being transformed.

In fact, Almodovar’s subversive movies performed a sex change on Spain’s national stereotypes. Replacing the traditional macho matadors, flamenco dancers and fascists from the Francoist era with transsexuals, gays, lesbians and liberated women from la movida, the youth movement that pretended the dictator never existed, Almodovar succeeded in making marginal subcultures mainstream (which seemed impossible). At a time when the rest of the world was urging us to say No, Almodovar’s subversive comic melodramas were daring us to say YES!

His transformative films expand our imagination and our capacity to empathize with others, regardless of how extreme they are. For, he purposely confronts us with the most improbable plots and the most outrageous characters but still makes them emotionally compelling. If we can learn to love these characters, then WE are the ones who are humanized in the process.

Unlike some of his most famous actors—such as, Antonio Banderas and Penelope Cruz—whose crossovers to Hollywood he helped make possible, thus far Pedro has deliberately stayed home in Spain, making films only in Spanish, for there his production company El Deseo can protect his artistic freedom. Yet his films were never insular; they still have great global and transnational appeal—both with audiences and with critics. For, they cultivate a rich intertexutality with films from the rest of the world, including Hollywood, and demonstrate, by contrast, his on-going innovation and growth. His films also show us why melodrama is the ideal global genre—one that is accessible worldwide and can so easily be combined with other genres and narrative forms—from comedy to horror and noir, and from TV soaps to opera and dance.

With their lush colors, stirring rhythms, passionate characters, and torturous turns in the plot, Almodovar’s melodramas are woven together like a rich narrative tapestry, which we can enter through any individual work. It is this growing database or network of interwoven stories, with all of their intricate variations and emotional reverberations--this laberinto de pasiones—that makes his cinema so exciting and transformative...and so worthy of the Eisenstein Award. Congratulations!

Thank you all for coming.